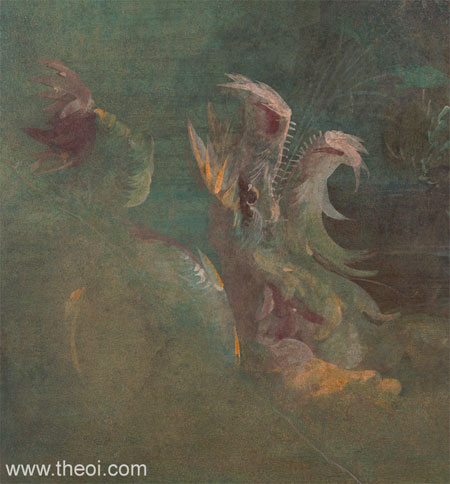 In the myth of Perseus and Andromeda, Perseus was on his way home from beheaded the Gorgon monster, Medusa, when he saw a beautiful woman chained to a rock and facing imminent death from being eaten by Cetus. Cetus was a sea monster that Poseidon sent to bring terror to the land of Aethiopia.

Andromeda was the beautiful daughter of the king and queen of Aethiopia. Queen Casseiopeia bragged that Andromeda was more beautiful than the Nereid sea nymphs. To punish her, Poseidon sent Cetus to devour Andromeda while she was chained to a rock. Just as Andromeda was about to be eaten, Perseus saved her from Cetus by either stabbing Cetus or using Medusa’s head to turn the Cetus into stone.

Scylla was a six-headed sea monster who lived under a rock in the straits of Messina. Charybdis was the whirlpool that would devour the ships of sailors who may have escaped the wrath of Scylla during their journey.

In Norse mythology, the Kraken is a giant Octopus that brings terror upon those sailors who sail in the waters where it lives. The Kraken would wrap its large tentacles around the ships and pull the ships to the bottom of the sea, devouring them along the way.

In The Odyssey, Odysseus is on his journey home when he is imprisoned by Calypso for seven years.  Calypso is a sea nymph who wanted to turn Odysseus into an immortal and marry him. Odysseus is married to Penelope, who he is trying to return home to. While on Calypso’s island, Athena asks Zeus to release Odysseus from Calypso, to which Zeus complies.

Another mythical sea creature in The Odyssey is Circe. Circe is a goddess and is also the daughter of the god of the sun, Helios. Circe turned Odysseus and his men into swine while on their journey home.

To do this, Hercules had the help of his nephew. When Hercules would cut off a head, his nephew would use a flaming torch to prevent a new head from growing in its place. Once all of the heads were cut off, and a flame was applied to each one, the Lernean Hydra died, and Hercules buried it under a large rock.