Ancient Greek and Roman writers imagined a host of fantastic creatures inhabiting the unexplored corners of the world. The most famous collection of these is found in Pliny's Natural History, a book which inspired medieval bestiaries. The images below are from a couple of illuminated medieval manuscripts. 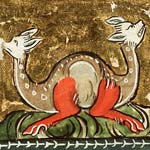 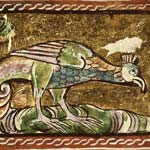 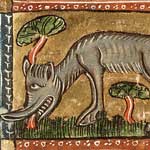 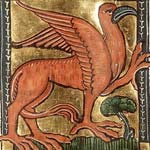 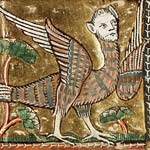 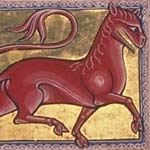 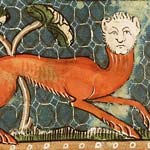 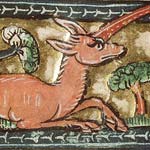 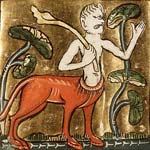 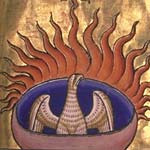 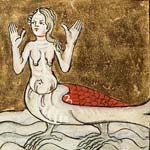 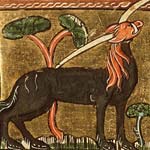 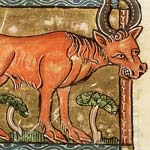 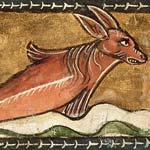 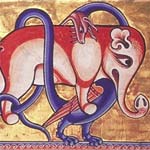 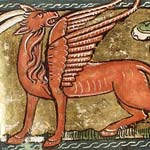 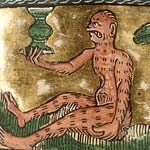 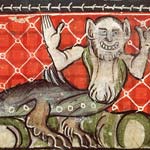 A LIST OF THE FANTASTIC CREATURES FROM ANCIENT GREEK LEGEND

The following creatures were all regarded as species of animal.

AMPHISBAENA (Amphisbaina) A Saharan serpent with two heads, one at each end of its body.

BASILISK (Basiliskos) A deadly African serpent which killed by touch and poisonous breath.

CATOBLEPAS (Katobleps) A bull-like African beast whose downward looking head, when raised, could killa man by gaze or with its noxious breath.

CROCOTTA (Krokottas) A hyena-like Aethiopian beast with a powerful jaw-plate in place of teeth which imitated the human voice to lure its prey.

DRAGON, PHRYGIAN (Drakon Phrygios) Giant Anatolian serpents which stood upright on their tails to snare birds from the air.

EALE (Eale) An antelope-like beast with tusks and moveable horns.

GRIFFIN (Gryps) An eagle-headed lion native to the mountains of Scythia in North-Eastern Europe.

LEUCROCOTTA (Leukrokottas) A hyena-like Aethiopian beast with a powerful jaw-plate in place of teeth which imitated the human voice to lure its prey.

MANTICORE (Mantikhora) A winged Persian monster with the head of a man, the body of a lion and a spiked missile-throwing tail.

NEADES A giant beast native to the island of Samos whose roar could split open the ground.

ONOCENTAUR (Onokentauros) An African animal which was a cross between a man and an ass.

PHOENIX (Phoinix) A fabulous golden-red bird whose feathers shone with the light of the sun.

SATYR, LEMNIAN (Satyros Lemnios) A satyr which consorted with a woman of the island of Lemnos.

SCOLOPENDRA (Skolopendra) A gargantuan sea-monster with hair extending from its nostrils, a flat crayfish-like tail and rows of webbed feet lining each of its flanks.

TRITON TANAGRAN (Triton) A monstrous sea daemon with the upper body of a man and the tail of a fish. It was a fearsome, scaly monster with sharp carnivorous teeth.

UNICORN (Monokeratos) A white Indian horse equipped with a single, magical horn. The Greek name for the creature was Monoceratus ("One-Horn").

YALE (Eale) An antelope-like beast with tusks and moveable horns.

The Medieval Bestiary by David Badke