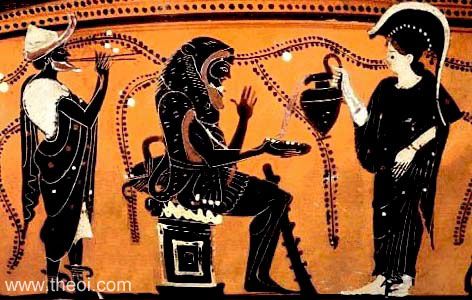 Heracles is entertained by the gods Hermes and Athena. Hermes, wearing a petasos cap, stands on the left playing a flute. Heracles is seated a stool with his club resting against a leg. He wears a lion-skin cape and holds a cup in one hand. Athena, wearing a peaked helm, pours wine from an oinochoe jug. The painting perhaps depicts the hero's reception on Olympus following his apotheosis.