The giants of Greek mythology--or Gigantes ("the earth-born") as they are named in the Greek tongue--were a class of oversized and ofttimes monstrous men closely related to the gods. The most famous of these were the hundred Thracian Gigantes who waged war on the gods, but there were many others besides including the handsome giant Orion, the one-eyed Polyphemus and the six-armed Gegenees. 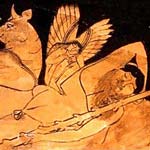 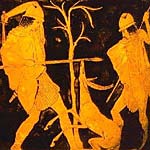 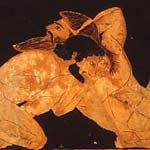 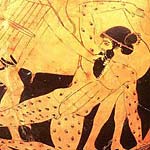 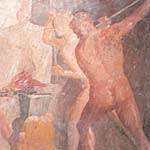 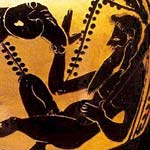 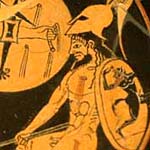 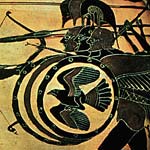 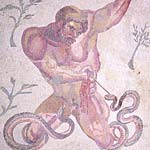 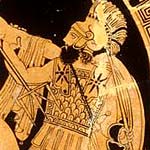 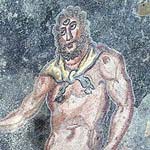 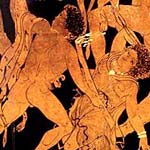 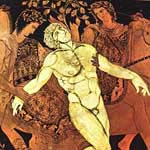 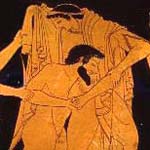 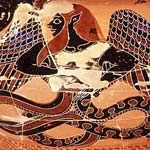 AGRIUS (Agrios) A man-eating Thracian giant who was half man and half bear.

ALCYONEUS (Alkyoneus) The king of the Thracian giants who was slain by Heracles.

ALOADAE (Aloidai) Twin giants who attempted to storm heaven by piling mountains one upon the other.

ALPOS A Sicilian giant who was slain by the god Dionysus.

ANTAEUS (Antaios) A gigantic Libyan king who wrestled to death all visitors to his realm until he was slain by Heracles.

ANTIPHATES The king of the man-eating giants known as Laestrygones which were encountered by Odysseus on his travels.

ANTIPHATES, WIFE & DAUGHTER OF These two were female giants, a rarity in Greek myth. The daughter was described as being "tall and powerful," and the wife, sitting on her throne, as "tall like a mountain peak."

ARGES One of the three elder Cyclopes.

ARGOS PANOPTES A hundred-eyed giant who was set by Hera to guard the maiden Io but was slain by Hermes.

ARISTAEUS (Aristaios) One of the Thracian Gigantes who was transformed into a dung beetle when he fled the battle with the gods.

AZEUS (Azeios) An Arcadian giant who fought in the War of the Titans. He was an ancestor of the Arcadian kings.

BRIAREUS One of the three hundred-handed Hecatoncheires.

BRONTES One of the three elder Cyclopes who forged the lightning bolts of Zeus.

CHARBYDIS (Kharybdis) A monstrous daughter of Poseidon who was chained to the sea floor by the gods where her inhalations formed a deadly whirlpool.

CHRYSAOR (Khrysaor) A giant born from the neck of the beheaded Gorgon Medusa.

CYCLOPES ELDER (Kyklopes) Three one-eyed giants assisted Zeus in the Titan War by crafting weapons for the gods including the lightning bolts for Zeus, a trident for Poseidon and an invisible helm for Hades.

CYCLOPES YOUNGER (Kyklopes) A tribe of one-eyed cannibalistic giants who shepherded flocks of sheep on the island of Sicily.

CYMOPOLEIA (Kymopoleia) A gigantic daughter of Poseidon who wed the hundred-handed giant Briareus.

DAMASEN A Mysian giant who destroyed a dragon that was ravaging the country.

DAMYSUS (Damysos) The swiftest of the Thracian Gigantes who made war on the gods.

ECHIDNADES (Ekhidnades) A serpent-footed giant and ally of the Titans who was slain by Ares when he attacked the fortress of the gods.

ELATREUS The giant son of one of the elder Cyclopes who was slain by Apollo.

ENCELADUS (Enkelados) One of the Thracian Gigantes who made war on the gods. He was buried by the goddess Athena beneath Mount Etna.

EPHIALTES One of the twin giants named Aloadae who attempted to storm heaven.

EURYALUS (Euryalos) One of the sons of the three elder Cyclopes slain by Apollo.

EURYMEDON The king of the giants who led his people to ruin.

GEGENEES A tribe of six armed giants encountered and slain by the Argonauts in Mysia.

GERYON (Geryones) A three-bodied giant who dwelt on the sunset isle at the ends of the earth. He was slain by Heracles when the hero arrived to fetch the giant's cattle as one of his twelve labours.

GIGANTES HECA A hundred Thracian giants born of Gaea the Earth when she was impregnated by the blood of the castrated Uranus. The Gigantes waged war on the gods and attempted to storm heaven, but were slain in battle.

GYES One of the three hundred-handed Hecatoncheires.

HALIMEDES A gigantic son of one of three elder Cyclopes who was slain by Apollo to avenge the death of his son Asclepius.

HECATONCHEIRES (Hekatonkheires) Three immortal giants with a hundred arms and fifty heads, who assisted Zeus in the War of the Titans. They were afterwards appointed as guards for the gates of Tartarus.

HOPLODAMUS (Hoplodamos) A warrior giant who came to the aid of Rhea after Cronus learned of her duplicity in the hiding of the infant god Zeus.

HYPERBOREAN GIANTS Three giant sons of Boreas, the North Wind, who were the chief priests of the mythical Hyperborean tribe.

LAESTRYGONES (Laistrygones) A tribe of cannibalistic giants encountered by Odysseus on his travels. They dwelt in a remote land where the sun never set.

LEON One of the Thracian Gigantes who made war on the gods. He was slain by Heracles who stripped him of his leonine skin.

MYLINUS (Mylinos) A Cretan giant slain by the god Zeus.

OREUS A man-eating Thracian giant who was half-man and half-bear.

ORION A gigantic hunter with the ability to walk on water. He was slain by Gaea or Artemis for some offence and placed amongst the stars as a constellation.

OTUS (Otos) One of the twin giants named Aloadae.

PERIBOEA (Periboia) A daughter of the king of the giants. She was probably a giantess.

POLYBOTES One of the Thracian giants who was buried beneath an island by Poseidon in their war against the gods.

POLYPHEMUS (Polyphemos) A cannibalistic Cyclops who was blinded by the hero Odysseus.

PORPHYRION The mightiest of the Thracian Gigantes who attempted to rape Hera in the war but was destroyed by Heracles and Zeus with arrows and lightning bolts.

RHODIAN GIGANTES A race of Giants native to the island of Rhodes.

STEROPES One of the three elder Cyclopes who forged the lightning bolts of Zeus.

SYCEUS (Sykeus) One of the Thracian Gigantes who made war on the gods. He fled the battle and was transformed by his mother Gaea into a fig tree.

TALOS A giant molded out of bronze and set to patrol the island of Crete. He was slain by the witch Medea when he tried to prevent the Argonauts from landing on the island.

TITYUS (Tityos) A lawless giant slain by Apollo and Artemis when he attempted to violate their mother Leto. He was afterwards chained in the Dungeons of the Damned where a vulture fed on his ever-regenerating liver.

TRACHIUS (Trakhios) A gigantic son of one of the elder Cyclopes slain by the god Apollo.

TYPHOEUS A monstrous, fire-breathing giant with serpentine legs and a hundred bestial heads. When he stormed heaven the gods fled in a body to Egypt and hid themselves in the guise of animals. Zeus alone stood firm but was defeated and stripped of his sinews. Later in a rematch the god was victorious and buried Typhoeus beneath the volcanic Mount Etna.

TYPHON Another name for Typhoeus.