The ancient Greek term for sea gods was "Theoi Halioi" or "Theoi Einalioi." These deities were commanded by the Sea-King Poseidon and his queen Amphitrite. Maritime scenes featuring a host of sea-gods were very popular in Greco-Roman mosaic. 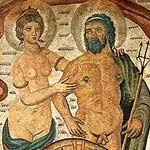 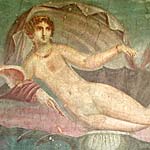 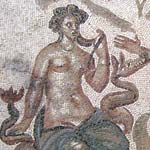 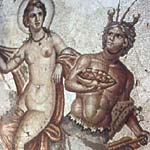 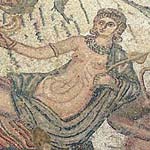 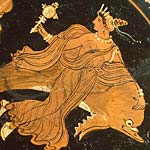 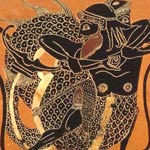 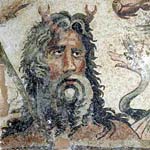 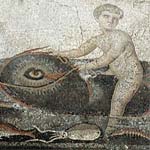 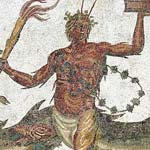 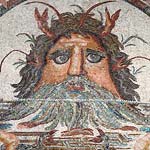 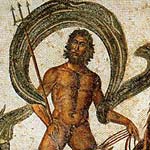 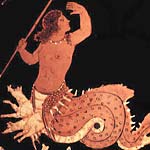 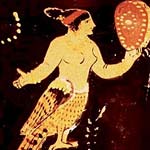 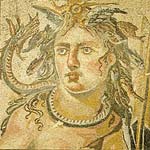 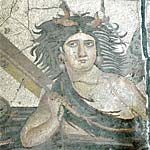 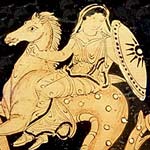 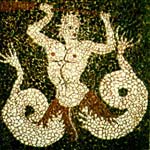 AEOLUS (Aiolos) The king of the winds. He kept the storm-winds, squalls and tempests locked away in the hollows of the floating island of Aiolia, to be released at the command of the gods.

ALCYONE & CEYX (Alkyone & Keyx) The former king and queen of the realm of Trachis were transformed into a pair of kingfishers. The birds presided over the halcyon days, a period of calm seas good for sailing.

AMPHITRITE The goddess queen of the sea, wife of Lord Poseidon. Amphitrite was the goddess who spawned the sea's rich bounty--fish and shellfish--as well as dolphins, seals and whales.

APHROS One of the Ichthyocentaurs or fish-tailed centaurs. Aphros was the god of the sea-foam who, along with his brother Bythos, carried Aphrodite ashore at her birth.

APHRODITE The goddess of love and beauty. She was born from the foam of the se, when the castrated genitals of Ouranos were cast down from heaven. Although Aphrodite was a heavenly goddess she retained a close kinship with the sea.

ARGYRA One of the sea nymphs whose name means the "Silvery One." She loved an Achaean man named Selemnus who was transformed into a river.

BENTHESICYME (Benthesikyme) One of the sea nymphs, a daughter of the god Poseidon. Her name means "deep wave" and she was the wife an Ethiopian king named Enalos "the man of the sea."

BRIAREUS (Briareos) The god of violent sea-storms. He was one of the Hecatoncheires, three hundred-handed, fifty-headed giants, and a son-in-law of Poseidon who made his home on the floor of the Aegean sea.

CABEIRO (Kabeiro) A sea nymph native to the shores of the island of Lemnos. She was a goddess of the Samothracian Mysteries, and the mother by Hephaestus of the Cabiri.

CALLISTE (Kalliste) The sea nymph of the Island of Calliste.

CAPHEIRA (Kapheira) The sea nymph nurse of the god Poseidon.

CARCINUS (Karkinos) A gigantic crab who allied itself with the Hydra against in a battle against Heracles. It was crushed beneath the hero's foot and placed amongst the stars as the constellation Cancer.

CETEA (Ketea) The monsters of the sea's depths. One, sent by Poseidon to ravage Troy, was slain by Heracles, another sent to punish the Ethiopians which was destroyed by Perseus.

CETO (Keto) An ancient sea-goddess. She was the goddess of the monsters and dangers of the deep. Her name means "whale" or "sea-monster."

CHARYBDIS (Kharybdis) The monstrous Daemon of whirlpools and the tides. She was chained to the sea-bed where her inhallation caused the seas to rise and fall.

DELPHIN The leader of the dolphins. He aided Poseidon in the wooing of Amphitrite, and as a reward was placed amongst the stars as the constellation Delphin.

DORIS One of the Oceanides, the wife of Nereus and mother of the fifty Nereides. She may have presided over the mingling of fresh water with the brine as her name suggests.

EIDOTHEA A prophetic sea-nymph. She was the daughter of the seal-herder god Proteus.

ECHIDNA (Ekhidna) A monstrous she-dragon, half serpent and half fair Nymph. She was born of the scum of the sea or the sea-gods Phorcys and Ceto, and was associated with slime, sea-rot, fetid salt-marshes, eels and lampreys. By the storm-giant Typhoeus she became the mother of many a foul beast.

ELECTRA (Elektra) One of the Oceanides, the wife of the sea-god Thaumas and mother of the Rainbow (Iris) and the Storm-Gusts (Harpyiae). She probably presided over her namesake "amber"-coloured clouds often seen accompanying the rainbow.

EROTES The winged gods of love. Like Aphrodite they were regarded as minor sea-deities and frequently appear in maritime scenes depicted in Roman mosaic.

EURYBIA An ancient sea-goddess with power over the shifts of the sea. Her descendants included the Winds and the Stars.

GALATEA (Galateia) One of the fifty Nereides. She probably presided over her the "milk-white" swirls in the brine as her name suggests.

GALENE One of the fifty Nereides, she was the goddess of calm seas.

GLAUCUS (Glaukos) The fisherman's sea-god. Glaukos was originally a fisherman who was turned into a fish-tailed god after eating a magical herb.

GORGONS (Gorgones) Three monstrous sea Daemones with snaky locks, bronze claws, wings, and wide grinning tusked mouths. As daughters of the sea gods Phorcys and Ceto they probably represented dangers of the sea, such as submerged rocks and reefs.

GRAEAE (Graiai) Three grey-haired, prematurely old sea Daemones, who shared but one tooth and one eye between them. They probably presided over the froth of sea-foam.

HALIA A sea nymph of the brine, mother of the Daemones of Rhodes. When she was raped by her sons she leapt into the sea for shame.

HALIAE (Haliai) The nymphs of the sea. They included not only the Nereides, but also the daughters of Poseidon and the other sea gods.

HARPIES (Harpyiai) A pair, or three, winged sea Daemones, daughters of the sea-god Thaumas. They were spirits of whirlwinds, water spouts, and violent storm gusts.

HELLE The goddess nymph of the Hellespont sea. She was the sister of the boy Phrixus who fell sea from the back of the flying Golden Ram during her escape from Greece. Poseidon rescued and transformed her into a sea-goddess.

HIPPOCAMPS (Hippokampoi) The fish-tailed horses of the sea, four of whom drew the chariot of Poseidon.

ICHTHYES (Ikhthyes) A pair of divine fish who brought Aphrodite ashore following her sea-birth. As reward they were placed amongst the stars as the constellation Pisces.

INO Another name for Leukothea.

LADON A monstrous, hundred-headed sea-serpent, son of the sea-gods Phorcys and Ceto. He guarded the western reaches of the sea, and the island and golden apples of the Hesperides.

LAMIA A monstrous shark-shaped sea Daemon. She was a devourer of men.

LEUCOTHEA (Leukothea) The goddess of the Ionian sea, a protector of sailors and fishermen. She was originally a princess named Ino who was entrusted with the nursing of Dionysus. Hera drove her husband mad, and fleeing his anger she leapt with her son Melicertes into the sea, where the gods transformed the pair into marine-deities.

NEREIDS (Nereides) A band of fifty goddess nymphs. They were providers of the sea's rich bounty of fish and protectors of sailors.

NEREUS An ancient fish-tailed sea-god. He and his fifty Nereid daughters presided over the sea's rich bounty of fish and salt.

NERITES A sea Daemon who was transformed into a shell-fish by the goddess Aphrodite.

OCEANUS (Okeanos) The Titan god of the earth-encircling, fresh-water river Oceanus. In late classical times he was re-imagined as a god of the briny sea.

OEOLYCA (Oiolyka) A sea nymph daughter of the stormy sea-gods Briareus and Cymopoleia. She probably presided over storm surges and flooding waves. Her name means "the Lone Wolf."

PALAEMON (Palaimon) A sea-god protector of sailors and fishermen who was depicted as a boy riding dolphin-back. He was originally the boy Melicertes, child of Ino of Thebes. His father was driven mad by Hera, and Ino, fleeing his wrath, leapt into the sea with the child where the two were transformed into marine divinities.

PALLAS A warrior sea nymph, friend and companion of Athena.

PHORCYS (Phorkys) An ancient sea god who presided over the many dangers of the sea. His name is connected with the Greek word for seal.

PONTUS (Pontos) The Protogenos or primordial god of the sea. Pontos was little the liquid form of the sea itself rather than an anthropomorphic god.

POSEIDON The king of the seas and lord of the sea-gods. Poseidon received his domain when the three sons of Kronos drew lots for division of the universe. He dwelt in a golden palace on the sea bed with his queen Amphitrite and son Triton.

PROSEOOUS DAEMONES Evil sea Daemones which haunted the dark caverns of the island of Rhodes. They were imprisoned beneath the island by their father Poseidon for their crimes.

PROTEUS An old shape-shifting, prophetic sea-god. He was the herder of Poseidon's seals.

PSAMATHE One of the fifty Nereids. She was the goddess of sandy beaches.

RHODE A sea-nymph daughter of the god Poseidon. She was the goddess of the island of Rhodes.

SIRENS (Seirenes) Three dangerous sea Daemones with the heads of women and the bodies of birds. They lured sailors to their deaths with their irresistable siren-song. Some say they leapt into the sea in despair when Odysseus sailed past unharmed.

SCYLLA (Skylla) A monstrous sea Daemon who preyed on passing sailors. She had the upper body of a nymph, the tail of a fish, and a ring of six ravening dog-heads circling her waste. Some say she was slain by Heracles but restored to life by her father the sea-god Phorcys with flaming torches.

TELCHINES (Telkhines) Sea Daemones native to the island of Rhodes. They were practitioners of fell magic, bringing forth storms and drought, and killing men with the power of the evil eye. The gods buried them in the depths of the sea.

TETHYS A Titan goddess associated with the sources of fresh-water who was later imagined as a sea-goddess similar to Thalassa.

THALASSA The Protogenos or primeval goddess of the sea. She was the mother of the fishes by her male counterpart Pontus.

THAUMAS An ancient sea god. He presided over the wonders of the sea. By Electra he was the father of Iris (rainbow) and the Harpyiae (storm gusts).

THETIS The leader of the fifty Nereids. She presided over the spawning of marine life in the sea.

THOOSA A sea nymph, the mother of the Cyclops Polyphemus by Poseidon. She may have presided over "swift" currents and sea rips, as her name suggests. Her parents and siblings represented other dangers of the sea.

TRITEIA A militant sea nymph of the Achaean coast. She was a companion of the god Ares.

TRITON The herald of the god Poseidon. A blow of his conch-shell horn calmed the waves.

TRITONES Fish-tailed Daemones of the sea, the male counterparts of the sea nymphs. They belonged to the train of Poseidon.