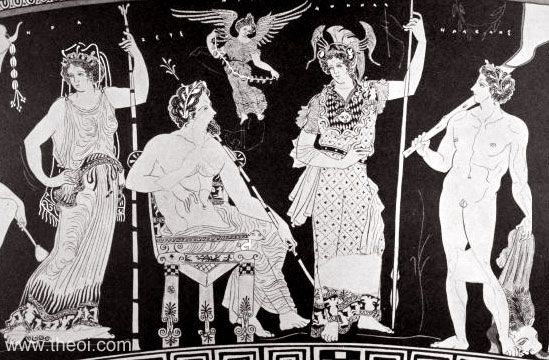 Detail of Hera, Zeus and Athena from a painting depicting Herakles' entrance into Olympus. The king of the gods is seated on a throne, with a tiny winged Nike (Victory) flying over his shoulder. He holds a royal staff, as does his queen, Hera, who stands to his left gazing away (in anger?). The goddess also wears an elaborate crown. Athena leads Heracles to the throne of Zeus. She is depicted holding a spear, and wearing the aegis cloak and an elaborate helm. The aegis is trimmed with serpents and set with the head of the Gorgon.