Apollo and Heracles struggle for the Delphic tripod. Heracles is depicted as a bearded man wearing a lion-skin cloak, and Apollo as a youth with bow in hand. Heracles is supported by Athena who wears a helm and snake-trimmed aigis cloak set with the Gorgon's head. She holds a shield and spear, and wears a high-crested helm. Artemis or the Phthia of Delphi stands behind Apollo holding a plant frond. 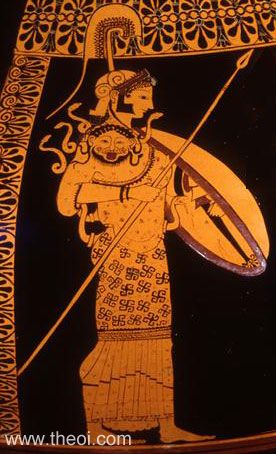 Detail of the goddess Athena.