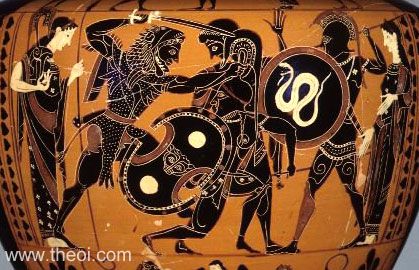 Heracles strikes down Cycnus, son of Ares, with a sword. The fight is witnessed by the gods Athena, Ares and Zeus. The king of the gods stands in the center with hand raised to prevent Ares from interfering. Behind Ares stands the mortal mother of Cycnus.

"It was he, Herakles, who killed Kyknos, high-hearted son of Ares, for he came upon him in the precinct of Apollon, himself and his father, Ares insatiable in battle, blazing both of them like the light of burning fire " - Hesiod, The Shield of Heracles