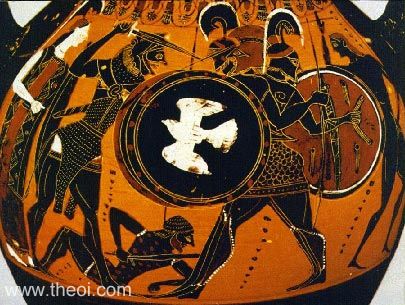 Side A: Heracles battles Cycnus (not shown).
Side B: Heracles battles the three-bodied giant Geryon. The giant is depicted as three men standing side by side, implicitly conjoined at the waist. They are armoured and equipped with shields and spears. The hero wears a lion-skin cape and wields a sword. Eurytion, the wounded herdsman of Geryon, lies at his feet, and the goddess Athena stands behind him providing support.