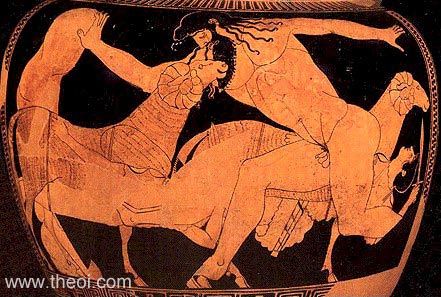 Odysseus and his companion Idmoneus (named on the vase) escape the cave of the Cyclops Polyphemus by hanging to the underside of rams. The blinded giant lifts the rock sealing his cave to release the flock. He is, unusually, depicted with hooves instead of feet.

"Polyphemos consumed with hideous pains, felt along the backs of all the rams as they stood still in front of him. The witless giant never found out that men were tied under the fleecy creatures' bellies. Last of them all came my [Odysseus'] own ram on his way out, burdened both with his own thick wool and with me the schemer." - Homer, Odyssey 9.250 ff