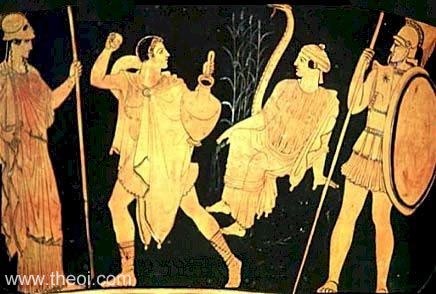 Cadmus battles the dragon-serpent of the sacred Ismenian spring. The hero holds a water jug (hydria) and wields a stone in his hand. The serpent rises up from the spring which is represented by a cluster of reeds and the water's native Naiad-nymph Ismene seated on a rock. Kadmos arrives at the sacred Ismenian spring with a jug (hydria) to collect water for libations. Two gods flank the scene--Athena on the left supporting Cadmus and Ares on the right driving the serpent.