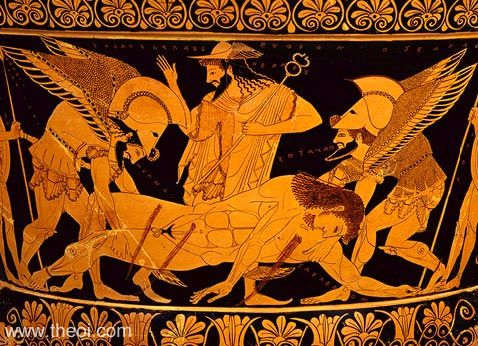 The winged gods Thanatos (Death) and Hypnos (Sleep) carry the body of Sarpedon from the battlefield of Troy. The pair are depicted as armoured warriors with crested helms. They are overseen by Hermes Psychopomp (Guide of the Dead) who wears a winged cap and boots and holds a herald's wand (kerykeion) in his hand.

"[Apollon] gave him [the dead Sarpedon] into the charge of swift messengers to carry him, of Hypnos (Sleep) and Thanatos (Death), who are twin brothers, and these two presently laid him down within the rich countryside of broad Lykia." - Homer, Iliad 16.681