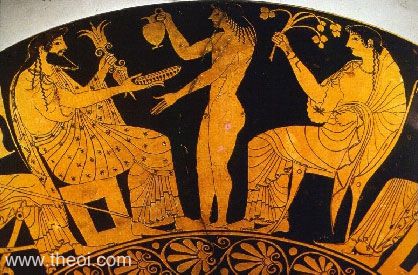 Side A: Detail of Zeus, Ganymedes and Hestia from a painting depicting the feast of the gods on Olympus. Zeus holds a stylized lightning-bolt in one hand and a drinking cup in the other. He is served by the naked youth Ganymedes holding an oinochoe jug. On the right, Hestia holds a flower in one hand and the branch of a chaste-tree(?) in the other. Other gods in this scene (not shown here) include Athena, Aphrodite, Ares, Hermes and Hebe.
Side B: Dionysus and Maenads (not shown).