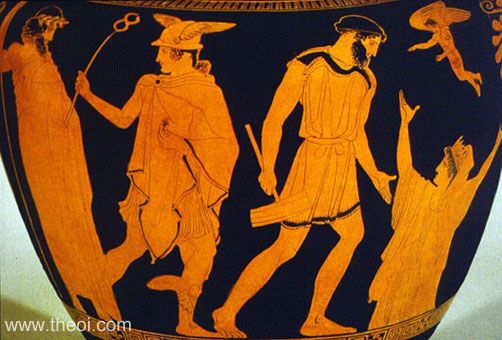 Epimetheus receives Pandora the first woman from Zeus. She is depicted as a woman rising out of the earth, crowned and veiled, with hands raised. Eros, the winged god of love, flutters above her. The Titan holds a farmer's trowel in one hand and extends the other to receive his new bride. Behind him stand the gods Hermes and Zeus. The messenger of the gods wears a winged cap and winged boots, and holds a herald's wand (kerykeion) in his hand. The king of the gods is crowned with a wreath of olive and bears a royal sceptre.