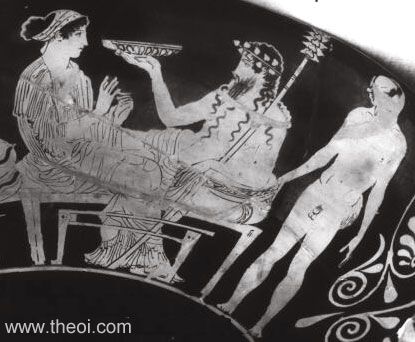 Sides: Detail of Ariadne, Dionysus and Comus from a painting depicting the feast of the gods on Olympus. Dionysus, reclining on a couch, is crowned with a wreath of ivy and holds a cup in one hand and a thyrsos in the other. He is attended by his cup-bearer, the balding satyr-boy Comus (Festivity). Other figures in the scene (not shown) are Zeus, Hera, Poseidon, Amphitrite, Ares and Aphrodite.
Tondo: Hades and Persephone (see other image).