T8.2 THE RETINUE OF ZEUS 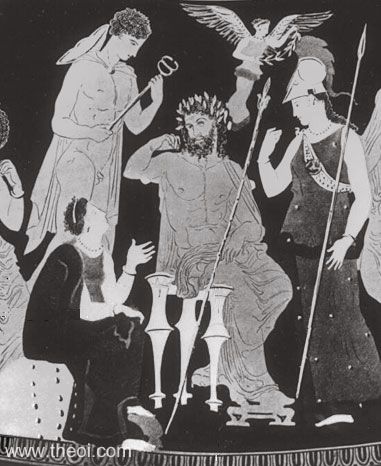 Side A: Zeus, the king of the gods, is attended by his divine retinue. He is seated on a throne, wears a wreath (of olive?) and holds a royal sceptre in his hand. Hermes stands to his left. The herald of the gods wears a petasos cap and chlamys cloak and holds a caduceus wand in his hand. Themis is seated on a stone beside Zeus and offers him her counsel. The stone is probably the omphalos, traditional seat of the oracular prophetesses of Delphi. Athena is accompanied by the miniature figure of a winged Nike (Victory). She wears a helm and sash-like aegis, and holds a spear in her hand. Several other gods (not shown) complete the scene.
Side B: Dionysus and Maenads (not shown).