Hercules was born a demi-god to Zeus and the mortal Alcmene. Zeus was married to Hera, so he left Hercules to be raised by Alcmene and her husband, King Amphitryon. Hera knew of her husband’s unfaithfulness, which made her hate Hercules. Hera vowed to kill Hercules by sending snakes into his cradle as he was an infant. Hercules killed the snakes by strangling them to death, which was the first indication of his godly strength.

In an effort to destroy Hercules, Hera sent upon him insanity which made Hercules kill his wife and children. When Hercules regained his awareness of what he had done, he was grief-stricken and asked Apollo how he could repent for what he had done. Apollo told Hercules that he must become enslaved to King Eurystheus.

Hercules came to Eurystheus and told him that he was indebted to him for the death of his wife and children. Hera, who still wanted her revenge against Hercules, told Eurystheus that Hercules must complete twelve seemingly impossible and deadly labors in order to obtain forgiveness for killing his family. Hercules had to kill a lion, slay a hydra, and capture a golden hind, but it was his 10th labor that proved to be most difficult.

The 10th Labor of Hercules: the Cattle of Geryon 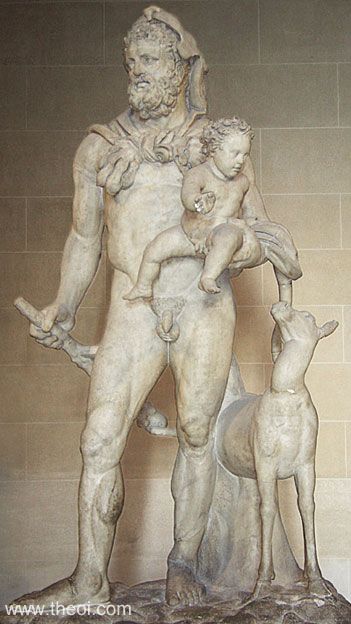 Eurystheus ordered Hercules to retrieve the cattle of Geryon. Geryon was a giant with three heads and one body. Geryon lived on the island of Erytheia. When Hercules reached the island of Erytheia, he was met by the two-headed dog, Orthus. Orthus attacked Hercules, and Hercules was able to kill Orthus with his club. A herdsman named Eurytion followed the Orthus and attempted to attack Hercules.

Hercules subsequently killed Eurtyion in the same fashion as he had killed Orthus. After Orthus and Eurytion had been killed, the Geryon appeared. Hercules killed the Geryon with his bow and arrow and apprehended the cattle.

Getting the Cattle Home

On his way home with the cattle, Hercules encounters two sons of Poseidon who try to steal the herd. Hercules kills the sons and continues on his journey home.

At the city of Rhegium, a bull got loose from the herd and jumped into the sea. It is told in this myth that the bull swam all the way to another country. As the native word for bull was “italus,” it is told that the bull founded the country Italy.

The bull had become a possession of Eryx, son to Poseidon, who put the bull in his own herd. Hercules was determined to find the bull, as he needed to bring the entire herd of cattle to Eurystheus. Therefore, Hercules entrusted the herd with Greek god Hephaestus.

With the herd finally intact, Hercules made his way to the Ionian Sea. Hera was determined that Hercules fail at the labor, so she sent upon horseflies to terrorize the herd. The cattle scattered at the swarm of flies in all different directions. Hercules had to journey throughout the land to gather the herd of cattle.

Originally, Hercules was supposed to complete ten labors for Eurystheus; however, Eurystheus decided that two of the labors that were completed did not count.

The second labor that did not count was labor number five; the cleaning of the stables. Eurystheus decided that the completion of this labor did not count because Hercules had used the river to clean the stables, as well as accepted payment for providing the service.

The disqualification of these two labors meant that two more labors would be added in their place. Had these two labors counted, Hercules would have completed his labors when he brought the cattle of Geryon to Eurystheus.

As most of the labors that Hercules endured were dangerous and potentially deadly, the 10th labor was draining more than deadly. Hercules had to endure more obstacles during the completion of the 10th labor than the majority of the other labors.

Once the labors were completed, Hercules never got to live a peaceful life. Hercules was still faced with battles, obstacles, and hurdles. Because of his strength and infamy, he was often called upon by the gods to help with certain feats.

The 12 labors of Hercules makes him one of the most admired and well-known heroes in Greek mythology, and Hercules 10th labor was the most complex labor he completed.