Achilles was the son of a beautiful sea nymph named Thetis and the king of the Myrmidons named Peleus. When Achilles was born, Thetis dipped Achilles into the Styx River to make him immortal. By doing so, Thetis had to hold Achilles by the heel of his foot, leaving the heel of his foot the only portion of his body mortal. This would make his heel the most vulnerable part of his body. 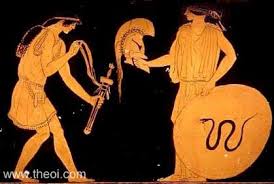 As the Trojan War progressed, Agamemnon, who was a leader of one of the Archaean army, took a young Trojan woman to be his slave and would not return her. The father of the young woman was a priest to the Greek god Apollo. He begged Agamemnon for the safe return of his daughter to which Agamemnon refused.

Apollo sent a plague and killed the Greek soldiers one by one until Chryseis was returned to her father. Agamemnon returned Chryseis to her father but demanded that Achilles give his wife, the Trojan princess Briseus, to him as a replacement.

Achilles refused to enter back into battle but came up with another solution: he would let Patroclus use his armor. Not only would this protect Patroclus, but this would make the Trojans believe Achilles was back in action.

Apollo was still angry that Agamemnon had taken Chryseis as his slave. The Trojans were retreating in fear that Achilles had now returned to the battlefield, but the angry Apollo decided he was going to help the Trojans. He would help a Trojan prince named Hector find and kill Patroclus.

After discovering that his best friend had died at the hands of Hector, Achilles decided to reenter the Trojan War in search of finding Hector and killing him. Once Achilles found Hector, he stabbed him in the throat and killed him. Achilles dragged Hector’s body behind his chariot to further his revenge for killing his friend. Finally, Achilles decides to send Hector’s body back to Troy for a proper burial.

Paris was Hector’s brother and was afraid of war. When Achilles entered Troy and found Paris, Paris did the only thing he knew: he shot his arrow at Achilles.

Apollo guided Paris’s arrow to the most vulnerable place on Achilles: his heel. Achilles died immediately when the arrow pierced his heel, resulting in the popular term used to describe a weakness, an “Achilles Heel.”