Stories in Greek mythology are what make the Greek Gods, Goddesses, and demigods more memorable. Their adventures become the subject of many artists’ work, and some even influenced traditions and terminology in the modern world. There is proof of some Greek mythological characters who existed in real life, but other stories and characters are more mythological and may not seem like more than fiction stories to most people. As the reader or viewer, you are the one who decides whether these tales are legend or fact.

The story of the Golden Fleece surrounds the Greek hero, Jason. Before we can get into his adventure, you must first learn who Jason was. 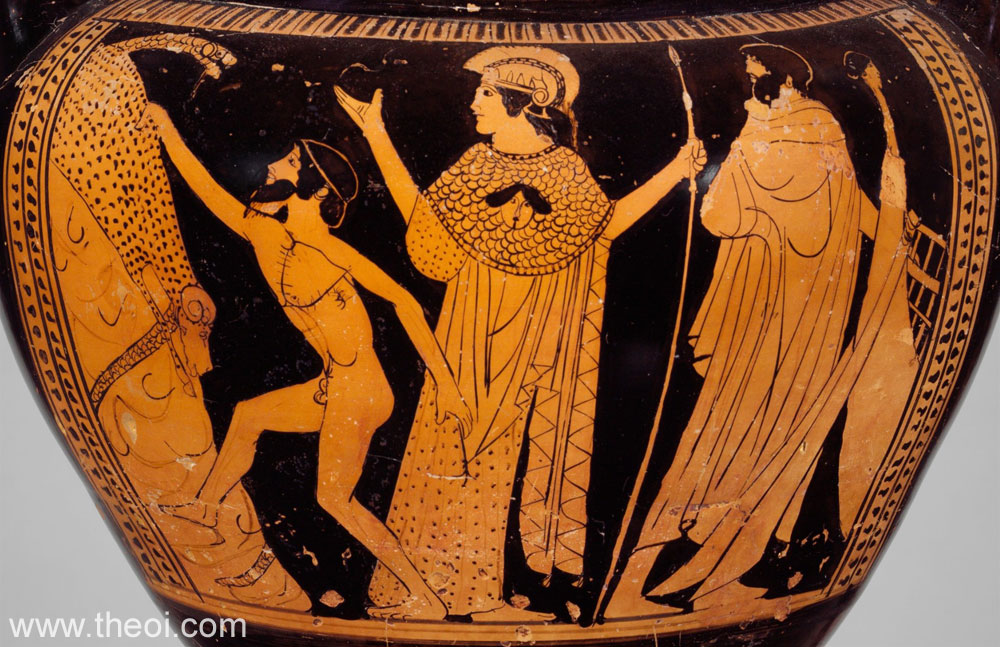 Who Was Jason in Greek Mythology?

Jason was a character in Greek mythology who went on a quest with some of the mightiest heroes of his time, and it became one of the most famous stories in mythology. Their mission was to retrieve a golden fleece from the King Aeetes of Colchis.

Jason wasn’t always in association with a mighty group of heroes, but he was always the son of a king. His father was Aeson, king of Iolcos in Thessaly. As for Jason’s mother, no one has an exact idea who she was. She could have been Alcimede, who was the daughter of Clymene, or Tyro, the daughter of Salmoneus. Whomever Jason’s mom was, she did not have much involvement in his life.

Although Aeson was Jason’s father, he did not raise him. Jason was stillborn as a baby, so Aeson sent him to Chiron, a centaur in Greek mythology who later became the constellation Sagittarius. Chiron raised Jason until he was an adult, at which time Jason tried returning to Iolcus, where he was born. Jason was not welcome in Iolcus because of King Pelias, who usurped Aeson, Jason’s father.

Searching for the Golden Fleece

The reason why Jason needed to find the Golden Fleece in the first place is because of the order given by Pelias. Pelias came up with the idea from Jason, who conversed with his uncle on what he would do to keep someone away. Jason did not realize at the time that Pelias wanted to rid himself of Jason forever. Pelias had taken the throne in Iolcus from Jason’s father, making Jason no longer the heir to the crown. So, since Pelias most likely felt threatened by Jason, he didn’t want him anywhere near Iolcus.

Pelias sent him on an impossible mission, to fetch the Golden Fleece from the King Aeetes of Colchis. Jason did not refuse the order forwarded by Pelias, but instead assembled a fleet of heroes and warriors to help him on his journey. This group was the Argonauts.

The Argonauts were made up of at least fifty heroes, or more, depending on what source you are examining. Some Greek historians think that there were around eighty-five members.A few of the known Argonauts were Jason, Heracles (Hercules), Castor, Polydeuces, Euphemus, Periclymenus, Orpheus, Erytus, Echion, Calais, Zetes, and Mopsus.

You can view variations of the listof Argonaut members from these sources:

The ship of the Argonauts was named, Argo.Argo would have to carry Jason and the entire group of Argonauts to Colchis, which was at the eastern end of the Black Sea, south of the Caucasus, in the western part of modern Georgia (the independent state in Transcaucasia, Russia, not the state in the United States of America).

Once Argo and its crew reached Colchis, they would have to get the Golden Fleece from Aeetes, the King of Colchis. Aeetes did not readily give up the Fleece since it was a gift to him. However, he did agree to hand the Golden Fleece over to Jason upon him completing a set of tasks. The first task was to plow a field using the Khalkotauroi, which was two fire-breathing bronze-hooved bulls; for the second task, Jason had to plant dragon’s teeth in the field he had plowed, and then defeat the stone warriors that sprouted from them.

There was no way Jason could have completed these tasks alone, but he had the help of the goddess, Hera, and Medea, whom Hera placed a love spell on for Jason. During the first task, Medea created an ointment for Jason to wear that made him invincible to the fire that the Khalkotauroi breathed at him. The salve worked since Medea was a trained sorceress and high priestess of Hecate.

The king still did not give Jason the fleece, and he planned to kill them before having a chance to find it. However, in her love, Medea leads Jason and the Argonauts to the Golden Fleece, which was hanging in a sacred oak tree.

Stops Along the Way to Retrieve the Golden Fleece

The Argonauts made a few stops on their way to retrieve the Golden Fleece in Colchis. They stopped at The Isle of Lemnos, The Gegeines, Salmydessus in Thrace, and The Symplegades. They faced many adventures at the places they stopped, and Jason started a new race of people on the Isle of Lemnos, called the Minyans.

Jason successfully retook the throne on Iolcus, which his uncle, Pelias, had taken from his father, Aeson. To do this, Jason had to go on a long expedition with his group of warriors, the Argonauts, to find a magical Golden Fleece. The mission was seemingly impossible to anyone who dared seek it, but the Argonauts had the help of the goddess, Hera. After accomplishing his task and claiming Medea as his wife, he still later became lonely and died due to being crushed by a wooden beam.