Hades is the brother of Zeus and Poseidon, who make up two of the Twelve Olympians. When the Greek gods had defeated the Titans, they needed to decide who would have control over each portion of the world. To decide this, the world was divided into three parts: the skies, the seas, and the underworld. 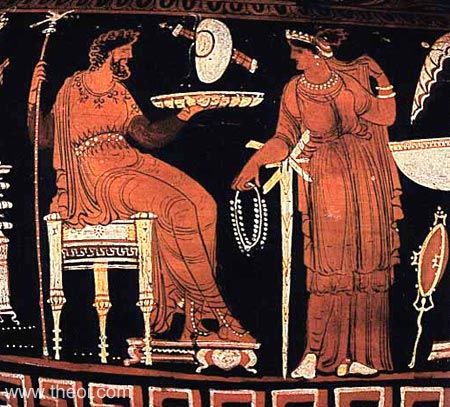 Greeks believed that if they spoke his name, Hades possessed enough power to bring them to the underworld, so Greeks would try not to speak his name.

Control Over the Earth’s Riches

Because Hades is the ruler of the underworld, he possesses and controls all of the riches that are found within the earth. This includes both natural riches as well as buried riches. He is often considered the wealthiest and richest of all of the gods.

Keeper of the Souls

Hades had a companion to keep him company and help guard the souls in the underworld. Cerberus was a three-headed dog who would stand guard at the entrance to the underworld to ensure that no souls attempted to escape, and that no person attempt to enter to steal a soul.

In the myth of Hades and Persephone, the ruler of the underworld stole Persephone from the earth when he opened up the earth where she was picking flowers. Persephone is the daughter of Zeus and Demeter, goddess of agriculture and harvest. Demeter discovers that Persephone is stolen by Hades, so she brings upon a great drought and famine to the earth.

Demeter vowed she would not restore vegetation until Persephone was returned. Zeus sends his son, Hermes, to go to the underworld and retrieve Persephone. Hermes complies and visits Hades in the underworld with Persephone sitting alongside him. Hermes tells Hades that Zeus and Demeter are requesting Persephone be returned to them.