CULT OF THE GODS

I. CULT OF THE TWELVE OLYMPIANS

The main cult gods of the ancient Greeks were the twelve Olympians which were worshipped throughout the country. Hestia was sometimes included in the list although her cult was mostly domestic. The portraits below are ancient Greek sculptures of the gods or Roman copies of older Greek works. 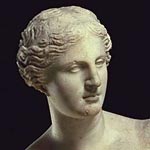 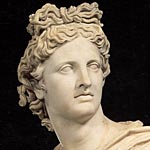 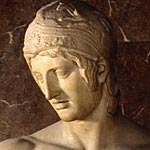 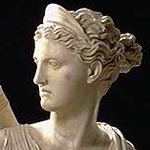 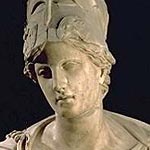 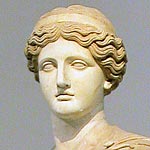 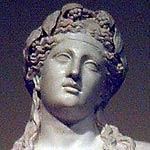 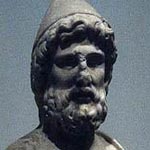 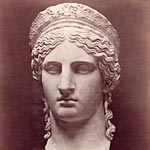 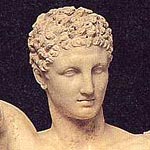 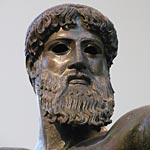 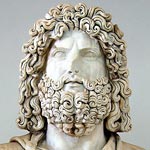 Of the secondary gods, the most widely worshipped were Persephone (alongside her mother Demeter), Heracles, Hecate, Eileithyia and Asclepius. Most of the other gods possessed only a few small local cults, and were scarcely honoured in the rest of the Greek world. For example the cult of Pan was largely confined to the region of Arcadia, and that of Eros to the small towns of Thespiae and Parion. 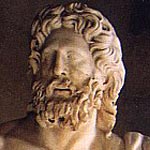 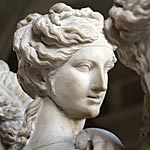 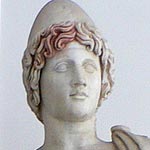 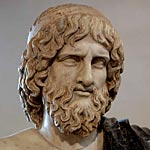 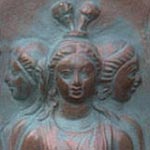 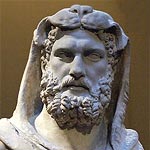 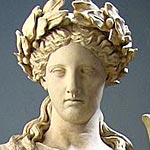 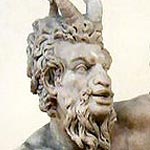 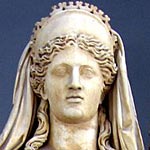 I. CULT OF THE TWELVE OLYMPIAN GODS

APHRODITE The goddess of love, marriage and procreation. She had shrines throughout Grreece, the most famous of which were those of Cythera, Corinth and Cyprus.

APOLLO The god of music and prophecy. His chief shrines were the island of Delos and the Oracles of Delphi and Dindyma.

ARES The god of war. Worshipped primarily in times of war, he also reputedly had important cults in Aetolia and Thesprotia in north-western Greece.

ARTEMIS The goddess of the wilds, maidens and childbirth. Her main cult centre was perhaps Calydon in Aetolia, although she was honoured by huntsmen, girls and women throughout Greece. Artemis was also identified with the many-breasted Ephesian goddess of Asia Minor.

ATHENA The goddess of war and the crafts. Most of the ancient acropoli or city-fortresses possessed a shrine dedicated to the goddess as protector of the city. She was also worshipped by craftsmen of all sorts. Her most celebrated cult was at Athens.

DEMETER The goddess of agriculture. She was worshipped in Mysteries throughout the Greek world, the most famous of which were those of Eleusis. Harvest- and fertility-festivals were also celebrated in her honour.

DIONYSUS The god of wine. He had shrines throughout Greece and was celebrated with the grape-harvest and opening of the new wine. His orgiastic Mystery cult was also widely celebrated, and plays were written and performed in his honour. His most famous cult centres were Thebes and neighbouring Mount Cithaeron in Boeotia, and the island of Naxos.

HEPHAESTUS The god of smiths, craftsmen and artisans. He was honoured by craftsmen throughout Greece and had many local festivals, but few large temples or shrines. His most important cult centre was the island of Lemnos, where he was represented as the national god.

HERA The goddess of marriage and queen of the gods. She was the woman's goddess, worshipped throughout Greece. Her main cult centres were those of Argos and the island of Samos. At Olympia she was honoured beside Zeus.

HERMES The god of shepherds, trade and athletics. He was widely worshipped in agora (marketplaces) throughout Greece, and in the Peloponnese by shepherds in the countryside. Fertility statues dedicated to the god called hermae were also erected along the roads. His main cult centre was on Mount Cyllene in Arcadia.

HESTIA The goddess of hearth and home. She was a domestic goddess worshipped at the fireplace. Unlike the other Olympian gods she possessed no great temples, festivals or cult centres, and was rarely representedi n Greek art.

POSEIDON The god of the sea, rivers and horses. His most important cult centre was near Corinth on the Isthmus where the Isthmian games were celebrated in his honour.

ZEUS The king of the gods, and the god of rain, rulership and civilisation in general. He was widely worshipped throughout Greece with numerous hill-top shrines where he was invoked as the rain-god. His main cult centres were Olympia and Nemea where Games were celebrated in his honour, and the Oracle of Dodona in the North.

ASCLEPIUS The god of medicine and patron of the ancient guild of doctors. His main cult centre was at Epidaurus in the Peloponnese.

CHARITES Goddesses of the graces. Their were widely worshipped in the Boeotian town of Orchomenus and on the island of Cos.

DIOSCURI Twin gods of horsmen, gymnasia and the Games, as well as protectors of sailors. Their cult was centred in the region of Sparta.

EILEITHYIA The goddess of childbirth. She was widely worshipped throughout Greece, with her chief cult centre at Amnisus in Crete.

EROS The god of love. He had dedicated cults in the small towns of Thespiae and Parion on the Hellespont.

HADES The god of the dead. He was usually only honoured at funerals, and indirectly in the Mystery cults. His most important dedicated shrine was the Oracle of the Dead in Thesprotia.

HECATE The goddess of magic and the ghosts of the dead. She was one of the major goddesses of the Eleusinian mysteries, and also possessed small household shrines protecting the entranceways.

HELIUS The god of the sun. His major cult centre was the island of Rhodes, famous for its colossal statue of the god.

HERACLES The great hero of the Greeks. His cult was widespread in ancient Greece, one of the most important of which was the site of his apotheosis on Mount Oeta in northern Greece.

LETO The goddess of motherhood. She was widely worshipped in conjunction with her children Apollo and Artemis.

MUSES The goddesses of music and the arts. Their main cult centres were located on Mount Helicon in Boeotia and Mount Pierus in Macedonia.

PAN The god of shepherds. He possessed numerous shrines in the Arcadian mountains, the most important of which was by Mount Lycaeus.

POTAMI The river-gods. Individual local rivers were worshipped throughout Greece and her colonies.

RHEA CYBELE The mother of the gods. The main culs of the Greek goddess Rhea was near the Cretan town of Gortyn. She was identified with the Phrygian goddess Cybele whose cult was introduced into Greece from the Near East.

TYCHE The goddess of fortune. She was popular goddess in the Greek colonies of Asia Minor where she was worshipped as the patron goddess of a city's good fortune. In art she was often depicted with the accroutements of a city : a turreted crown representing the town walls, a rudder for trade, and a cornucopia for economic prosperity.

III. OTHER GOD AND HERO CULTS

MINOR GODS - Many other gods and nymphs also possessed small shrines and minor festivals. However the scarce amount of information available on these is not sufficent to warrrant a dedicated cult page. These include figures such as Aristaeus, Themis, the Cabeiri, the Horae, the Anemi, the Nereids, etc. Even minor gods, which at first glance one might not expect to see in Greek religion, such as Iris the Rainbow, the hundred-handed Hecatoncheires, and the centaur Chiron, possessed small localised cults. Many others were worshipped only in conjunction with major deities, such as Peitho, the attendant of Aphrodite, and the various Eleusinian demi-gods in the retinue of Demeter.

HEROES - Many of the heroes of myth also possessed hero-shrines and cult in different parts of Greece.

* These were arguably their most important shrines in Greece.

* These were arguably their most important shrines in Greece.