Detail of Hebe, Dionysus, Leto, Chariclo, Hestia, Demeter, Iris and Peleus from a painting depicting the procession of gods attending the wedding of Peleus and Thetis.

King Peleus stands before his palace welcoming a procession of gods to his wedding feast. He holds a drinking cup in one hand and raises the other in greeting. The divine herald Iris leads the procession holding a herald's wand in one hand and pointing to the gods behind her with the other. She is dressed in a thigh-length robe embroidered with a flower at the breast and a pair winged boots. Four senior matrons follow close behind--Hestia and Demeter, Leto and Chariclo (wife of Chiron, granddaughter of Leto)--with Dionysus and Hebe. These six would preside over the wedding feast--Demeter and Hestia providing bread (as goddesses of grain and hearth), Leto and Chariclo meat (as mother and wife of the hunters Artemis and Chiron), and Dionysus and Hebe wine (as god of wine and divine cupbearer). 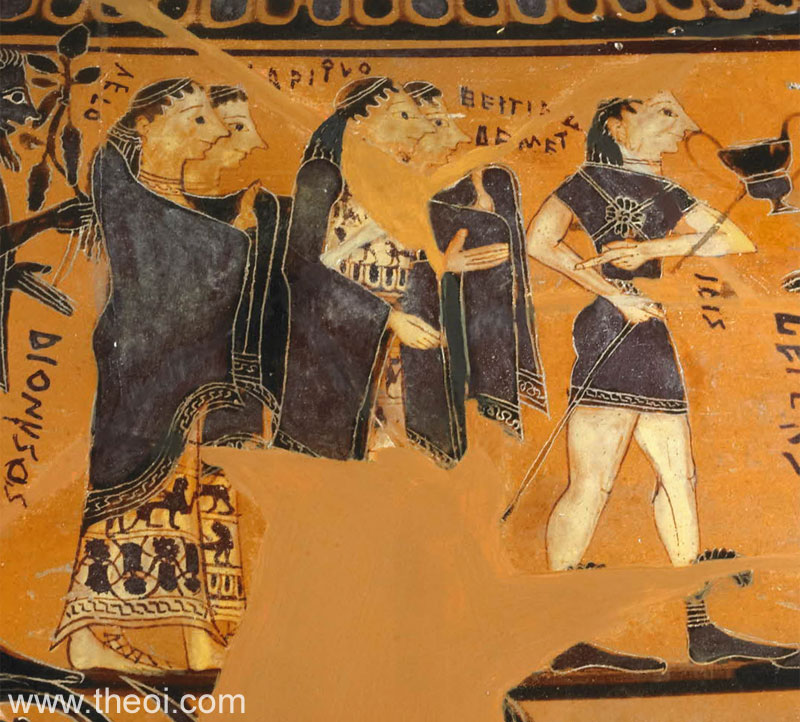 Detail of the goddesses Leto, Chariclo, Hestia, Demeter and Iris.