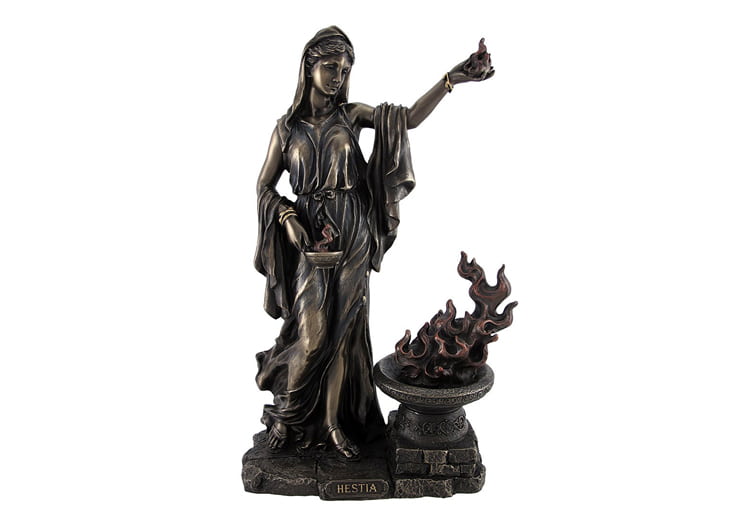 This statue featuring Titan god Atlas was constructed in 1937. It is made of bronze and depicts a strong Atlas holding up the earth over his shoulders.

This marble statue of Hercules features a muscular Hercules with two of his iconic symbols: his club and the skin of the Nemean lion. It was constructed in 216 AD by artist Glykon von Athen.

This statue features both Greek gods Hermes and Dionysus. Hermes is fully grown while Dionysus is an infant who is indicative of how much younger Dionysus was from the other Olympians. It was built by the Greeks around 330 BC and is currently located in the Archaeological Museum of Olympia.

This is a reproduction statue of the lost Athena Parthenos statue that previously resided in the Parthenon in Greece. This statue features Athena holding the Greek goddess, Nike, in her right hand.

Apollo Belvedere, a statue created by artist Leochares sometime between 120 AD and 140 AD, is located at the Vatican Museums in Vatican City, Italy. It suggests that the standing Apollo has just shot an arrow from his bow.

The Poseidon of Melos is believed to have been created around 235 BC. It was discovered in 1877 on the island of Melos, located in the Aegean Sea. The statue was found in pieces, so it had to be placed together with additional reconstructed pieces to fill in the areas that were missing.

Demeter of Knidos is a statue of the Greek goddess Demeter. It was created around 350 BC and portrayed a marble Demeter seated on her throne. Parts of the sculpture are missing, including Demeter’s lower arms and hands. It is currently on display at the British Museum in London, England.

One of the most famous Greek statues is the Venus de Milo. It is the iconic marble statue featuring a beautiful woman with arms that have been broken off. The artist is Alexandros of Antioch, who created Venus de Milo to represent the Greek goddess Aphrodite. It was created between 130 BC and 100 BC and is currently on display at the Louvre Museum in Paris, France.