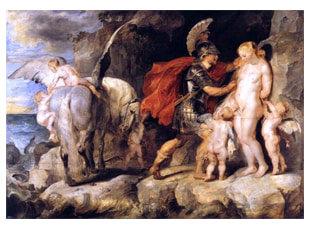 This painting by Titan shows Andromeda chained to the rocks awaiting her fateful death from the Cetus, a giant water serpent that Poseidon sent to devour the princess. In this painting, you see Perseus in the background about to engage in fighting the Cetus.

In the myth, Perseus slew the Cetus and saves Andromeda from being eaten.

Prometheus Bound is a painting by Peter Paul Rubens. Prometheus is a Titan hero who is known for creating man. Prometheus gives man the gift of fire, which Zeus is displeased with. So Zeus bound Prometheus to a rock and had an eagle eat him everyday.

This painting by John Singer Sargeant shows Achilles riding Chiron. Chiron was gifted to Achilles as a disciple and they were often seen together and in myths together.

4. Hercules and the Hydra

This glass painting by Antonio del Pollaiolo shows Hercules during one of his 12 labors of killing the Lernean Hydra. It shows the strong Hercules fighting the nine-headed Hydra in battle.

This is an oil painting by John William Waterhouse that shows Jason from Jason and the Argonauts and Medea. In the myth of Jason and the Argonauts, Jason goes to Colchis to retrieve the golden fleece when he sees Medea, the daughter of the king. She would fall in love with him and the two of them would get married.

6. The Judgment of Paris

This is a painting by Peter Paul Rubens that portrays Paris judging three women to determine who is the most beautiful. It is this even in Greek mythology that starts the Trojan War. Paris chose Aphrodite as the most beautiful of the three in turn for her promise that she would give him a gift if he chose her. Aphrodite would give him Helen of Sparta, sparking the 10-year long Trojan War.

7. Orpheus Leading Eurydice from the Underworld

Jean Baptiste Camille-Corot painted this picture of Orpheus and Eurydice in 1861. It shows Orpheus holding his lyre, the musical instrument Orpheus used to convince Hades to let Eurydice leave the underworld, and guiding his beloved wife out.

8. Telemachus and the Nymphs of Calypso

This painting by Angelica Kauffman shows Telemachus being welcomed by the beautiful nymphs of Calypso. This was painted in 1782.

One of the greatest myths about Greek hero Theseus describes his ability to kill the Minotaur. The Minotaur was being fed children from Athens, and Theseus was going to put a stop to it. This painting by Cima da Conegliano from 1505 shows Theseus the moment before he kills the Minotaur in the labyrinth on the island of Crete.

10. The Anger of Achilles

This painting by Jacques Louis David shows Achilles the moment he learns that the young woman he is supposed to be marrying is actually going to be sacrificed to the goddess Artemis. It shows Achilles as he draws his sword with a solemn Clytemnestra and Iphigenia.   It was painted in 1819.