Who is Theseus? The story of this young hero begins with Aegeus, the king of the ancient city of Athens.

He had several women in his life, but none of them were able to bear him a son who would go on to become his heir. So, the king, desperate for a way forward decided to consult the oracle of Delphi. He wanted to know what he could do to get a son.

The oracle’s response was quite cryptic, and he couldn’t make out what she meant by her statement. She explained to him that all he had to do was open his wine sack before he arrived in Athens.

This story traces the footsteps of Theseus one of the greatest heroes in ancient Greek mythology. Read on. 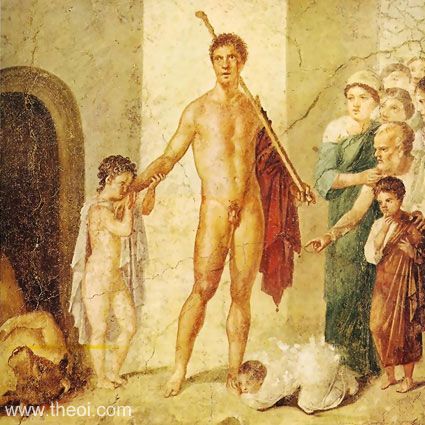 On his way home, Aegeus went to the palace of the wise king, Pittheus of Troezen and explained to him what the oracle had told him. The wise king immediately understood the prophecy.

So, Pittheus got Aegeus inebriated and offered his daughter the Princess Aethra to the king to spend the night with her. That night, the goddess Athena visited Aethra in a dream.

She instructed her to go to the beach and make an offering to the gods for her offspring to be blessed by them. She obliged. When she got there Poseidon, the god of the seas appeared from the water. He unified himself with her, and she got pregnant.

When Aegeus became aware of her pregnancy, he instructed her not to tell anyone that the child she was carrying was his. Instead told her that when he came of age, he was to go to Athens and assume his rightful place as the Prince of Attica.

He was also to take with him Aegeus’ sword, which he placed beneath a huge boulder. Once the young boy was strong enough to lift it, he would retrieve the sword and carry it with him when he goes to Athens.

Aethra obliged and later bore a beautiful baby boy. His name was Theseus. He was raised by his wise grandfather, who shaped him into the hero he became.

The Journey to Athens

When Theseus came of age, the time had come for him to go to the city of Athens. So he retrieved his father’s sword from beneath the boulder and embarked on the journey to Athens on foot.

It was long, arduous and chock full of untold dangers at every turn. But Theseus knew no fear and blazed his trail to reach his father whom he had never met.

On his way there, the young Theseus encountered many thieves; one of whom was Periphetes who was famous for his iron club. Theseus disarmed and killed him using his club and went on with his journey.

Later he crossed paths with Cercyon who was notorious for challenging everyone he met to a one-on-one fight without any weapons. He killed his opponents when they lost.

This did not intimidate Theseus. He subdued Cercyon using deadly fighting techniques that had never been witnessed before. Today, he is regarded as the inventor of Graeco-Roman wrestling.

His tribulations didn’t end there, though. He also came across a large wild boar that attacked him. But, not even Mother Nature’s fiercest creatures were a match for Theseus’ bravery.

The Arrival of the Crown Prince

When he finally arrived in Athens, the now-aging King Aegeus was not surprised to see him. He was already waiting for him since the sorceress Medea had already foreseen the coming of the King’s heir-apparent.

But Medea didn’t tell the king that it was indeed his son who had arrived. Instead, she lied to the King, warning him that this stranger would spell destruction for his kingdom.

Together, they hatched a plot to poison him once he got to the palace. When Theseus arrived, the Aegeus offered him a cup of wine to toast to his arrival. The wine had been laced with poison that would kill Theseus as soon as he took a sip of it.

Oblivious to the danger he was in Theseus raised his cup to propose a toast to the king’s health. In doing so, he exposed the sword that once belonged to Aegeus.

The king immediately recognized it and knocked the cup out of Theseus’ hand just when he was about to drink the wine. He embraced his son, who, after so many years, was finally in his arms.

The king expelled the sorceress Medea from the kingdom, and Theseus took his rightful place as the crown Prince of the city of Athens.

The Labyrinth of Minotaur

No sooner had Theseus assumed his position than emissaries of King Minos of Crete arrived in Athens to collect taxes owed to their King. Athens had been subjugated by Crete after the war between cities. It was prompted by the murder of Minos’ son while he was visiting the kingdom of King Aegeus.

As part of the peace treaty, Athens had to send 14 youngsters every year as a tribute. They would then be taken to the infamous labyrinth where they would be sacrificed to the dreaded Minotaur. The creature was half-man and half-bull.

When Theseus became aware of the situation, he was determined to put an end to it by slaying the terrifying creature. So, he volunteered to go with the youngsters and promised to return with them all after annihilating the beast.

King Aegeus tried to get him to give up on the idea, but Theseus’ mind was made up. So, they set the sails and departed for Crete.

When they arrived, they were taken to the king’s palace, where Princess Ariadne instantly fell in love with Theseus. Later that night, she visited him in the dungeons and gave him a sword to slay the beast and yarn of wool to help him find his way out of the labyrinth.

Who Is Theseus: The Fearless Hero

He then embarked on his mission into the dark labyrinth,unraveling the yarn with every turn. The tension was heavy. Sometimes, he would hear the creature snorting as it lurked in the shadows.

The floors and walls of the labyrinth were covered in blood. However, Theseus was fearless. He was confident that his blood would not color the floor red.

In an unexpected attack, the Minotaur appeared and tried to kill Theseus, but he managed to dodge every strike. With one devastating counterattack, Theseus managed to kill the beast and with that ended the creature’s reign of terror.

He led the youngsters out of the Labyrinth. They walked to the ship and set sail to escape from Crete.

When many Greek mythology stories are told, many often ask: Who is Theseus? The story is a fascinating one with many undertones that are reminiscent of the famous David and Goliath encounter. That courage can indeed overcome any obstacle no matter how monumental it might be.