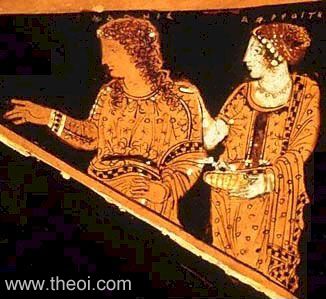 In modern times, the term “Adonis” can be used to refer to a man who is desirable and attractive. The word has deep roots in ancient Greek mythology because Adonis is the god of beauty and attraction – a male counterpart for Aphrodite. The story of Adonis and Aphrodite are intertwined, and their story is a classic account of jealousy and desire, rejection, and love.

There is an old myth about Adonis, which is an incredible love story containing a combination of death and tragedy on the one hand, and the happiness of returning from death on the other.

The myth of Adonis and Aphrodite, his lover, goes back to ancient civilizations from the Near East. This was a popular place among Canaanites and was renowned to the people of Egypt and Mesopotamia as well, even though each was called different names.

The myth about the god of beauty who, at a young age, faced death but then came back to life for his lover, the myth of Adonis, is a source of inspiration for many historians, artists, and poets alike, which has led to its widespread use as a significant theme in intellectual and literary productions.

From Adon to Adonis

Thought of as the most significant god in Canaanite, was the god Adon: Adonis the god of permanent renewal, fertility, and beauty. In Greek mythology, he was named Adonis and would become known by this name.

Along with Adonis, his myth includes his eternal love Astarte, the goddess of love and beauty. In Greek mythology, she was named Aphrodite. Their stories are so connected that Adonis’ myth wouldn’t be complete without mentioning her and the incredible love story that brought them together.

The story below is based on several Greek sources and other Roman references, such as Metamorphoses by Ovid.

The great king of Assyria, Cinyras (also called Theias), had a beautiful daughter who was given the name of Myrrha. Because of her beauty, the king would boast that his daughter was more attractive than the goddess of beauty and love, Aphrodite. At some point,Aphrodite heard that Cinyras was doing this and became very angry and came to the conclusion that she must retaliate.

Using her son Eros, or Cupid, the god of attraction and desire, she made it so that Myrrhafell in love with her father. She was also able to deceive Myrrha’s father to commit incest. Cinyras later found out about the trick and swore to kill his daughter, who escaped from her father after she found out that she was pregnant.

Myrrha was regretful and ashamed of her atrocious act and pleaded to the gods for their protection. The gods answered her prayers and turned her into a tree.

After nine months, the Myrrha tree broke off;this was the birth of Adonis.He had his mothers’ beauty. When Aphrodite laid eyes on Adonis, she was in awe of his beauty and decided that she wanted to hide him from all of the other goddesses by entrusting him to Persephone, goddess of the underworld. Persephone looked after the boy, and as he grew older and became more attractive, she fell in love with him.

Adonis was renowned for the skills he possessed for hunting. On one of his hunting adventures in the Afqa Forest, located by Byblos, Adonis was hurt by a wild boar and started to bleed in the hands of Aphrodite, who decanted magical nectar into his wounds. Adonis did end up dying, but his blood blended with the nectar and poured into the soil where a flower grew from the ground, the scent of which matched Aphrodite’s nectar and the color of which matched Adonis’s blood – the Anemone flower.

Adonis’s blood reached the river and turned the water red, the river then became to be known as the “Adonis River.”

A Different Version of the Myth

There are a few versions of the Adonis Greek mythology where Ares, the lover of Aphrodite and god of war, hears about Aphrodite’s love for the young Adonis and becomes incredibly jealous and plots his revenge.

Aphrodite was going after Adonis to sleep with him; however,Adonis wanted to hunt more than anything. Aphrodite asked Adonis to stopwith the treacherous sport that he loved because she couldn’t bear to lose him, knowing that Adonis would die horrifically. Adonis ignored her pleas and was killed when he was out hunting a wild boar, but this boar was actually Ares.

When Adonis died, Aphrodite heard his cries and went to be by his side. She cursed Ares and the Fates that had designed his death. While Adonis was still in her arms, Aphrodite turned the blood that dripped from his wounds onto the soil into windflowers (Anemones) as a memorial to their love.

Anemones grew from Adonis’ blood, and his spirit went back to the Underworld. In response to the tearful Aphrodite, Zeus decided that Adonis should only spend half of a year in the Underworld.

The Meaning Behind the Story

According to many scholars, the resurrection and death of Adonis represent the revival and decay of the plant year. He was worshipped as a god of grain crops, such as corn, which were very important to the ancient inhabitants of Greece.

It is also closely related to the concept of agricultural and vegetation civilizations in the Canaanite areas. The winter was a season full of sadness and gloom for the civilians in these areas, whereas summer and spring brought them joy for a new life. Therefore, the myth is also commonly thought of as being an expression of people’s psychological perceptions, reflections, and thinking.