Athena is often known as the matriarch of Greek mythology. She is the Greek goddess of war, wisdom, inspiration, courage, justice, arts, crafts, and skill. Athena is strategic and often helps the heroes of Greek mythology in their endeavors when they are in need of help. She is considered a warrior who was ready for battle since the day of her birth.

Athena is Born from Zeus 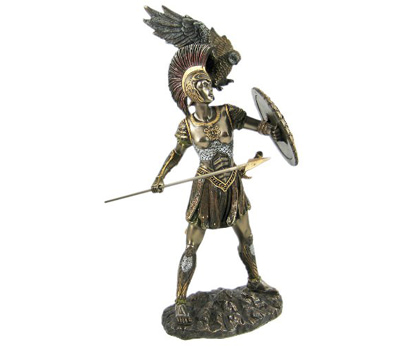 Zeus, the most powerful Greek god, is the father of Athena. Before Athena was born, Zeus married his first wife, Metis. Metis was an Oceanid, born from Greek god Oceanus and Titan goddess Tethys. It is believed that Metis is the mother of Athena; however, Metis did not give birth to Athena.

Zeus was told that any child born from Metis would possess more power than Zeus. To prevent this from happening, Zeus swallowed Metis. Unbeknownst to Zeus, he had swallowed Metis while she was pregnant with Athena.

After swallowing Metis, Zeus began having extremely painful headaches. On this particular day, his headache became so powerful and so painful that Zeus cried out in such excruciating pain that the gods came running to check on him.

Hermes and Hephaestus arrived to see why Zeus was in pain, and Zeus told them of his excruciating pain in his head. Hermes directed Hephaestus to cut Zeus’s head open to relieve him of the pain. When Hephaestus cut open Zeus’s head, Athena was born.

Metis gave birth to Athena after Metis was swallowed. Athena began growing inside Zeus’s head. When Haphaestus cut open Zeus’s head, and Athena was born, she was not born an infant. Instead, Athena was born a fully grown warrior, dressed in armor and ready for war. This is how Athena became the goddess of war and wisdom. Athena would use her wisdom to aid Greek heroes during their endeavors.

When Athena was born, she is fully grown and dressed for battle. She instantly became Zeus’s favorite child, as she played an important role in helping many Greek heroes slay creatures or defeat enemies.

One Greek hero who Athena helped was Perseus. Perseus needed to slay the Gorgon Medusa and bring her head back to the king Polydectes. This was exceptionally difficult because anyone who looked into Medusa’s eyes were turned to stone. Therefore, Perseus called on Athena to help him slay Medusa and take her head back to Polydectes.

Another Greek hero who Athena helped was Hercules. She helped Hercules complete his twelve labors. These labors were extremely difficult and included slaying and capturing vicious creatures.

In Odysseus’s journey home in Homer’s The Iliad, Athena disguises herself as Mentor, an old friend of Odysseus, to help him with a safe return. Athena also helps Odysseus in the Trojan War by inspiring Odysseus and Epeios to build a wooden horse to house the Greeks and allow them to infiltrate the city of Troy.

Without Athena’s wisdom and strategy, Greek heroes like Odysseus, Hercules, and Perseus may not have been able to complete the difficult tasks they were presented with.

Other Facts About Athena

Athena is often represented by symbols, such as the shield and sword that legend says she was born holding. Athena is also represented by an owl, as the owl represents the wisdom that Athena possesses.

Athena has many half-siblings through her father, Zeus. These half-siblings include Olympian gods Artemis, Apollo, Ares, Hephaestus, Hermes, and Dionysus. Among all of her half-siblings, it is said that Athena was Zeus’s favorite child.