The story of how Medusa was killed by Perseus is one of the most thrilling stories in Greek mythology. Perseus was born to the god, Zeus, and mortal woman, Danae, making him a demi-god with great strength and intelligent ingenuity. He would become one of the great heroes in Greek mythology because of his ability to behead the monster, Medusa.

The Early Years of Perseus 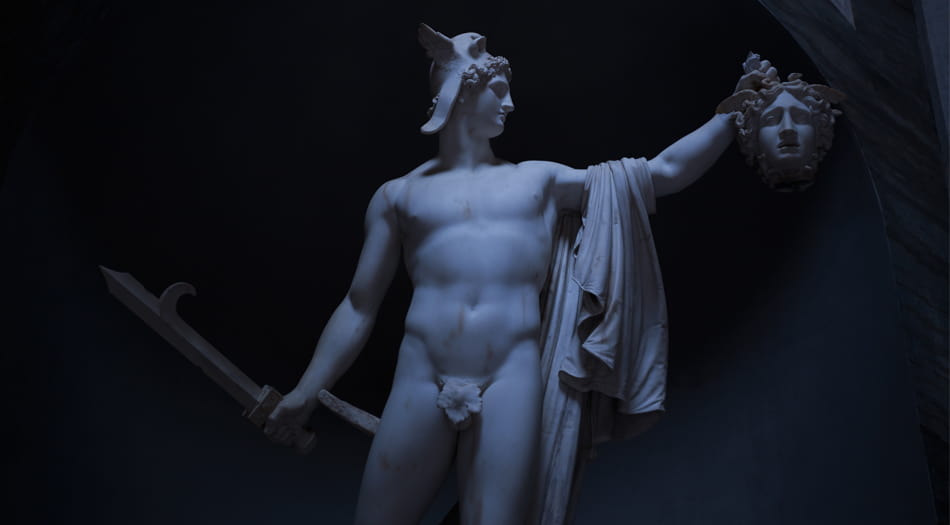 The chest came ashore on the island of Serifos, where a fisherman found them and took them in. The fisherman was the brother of King Polydectes, who was a malicious king. Perseus would grow into a strong young man with great power and intelligence.

While the versions are different, they have the same outcome; Perseus is ordered by King Polydectes to bring back the head of Medusa.

Medusa was born a beautiful mortal woman with long flowing hair. Medusa was a temptress among the gods, and Poseidon had impregnated the mortal while in the temple of Athena. Athena cursed the mortal Medusa with a hideous face and snakes for hair. Medusa would be confined to a cave, and anyone who made eye contact with the Gorgon would be turned to stone.

Perseus Receives Gifts from the Gods

Using the gifts from the gods, Perseus locates and enters Medusa’s cave. Perseus finds Medusa asleep inside her cave and makes sure not to wake her. Perseus takes the reflective bronze shield from Athena and holds it up to use as a mirror to locate Medusa. Walking backward towards Medusa, Perseus continues to hold the shield in the air to keep a clear view of Medusa, making sure to only look at Medusa in the shield.

As Perseus crept closer to Medusa, he wielded the sword that Hephaestus had given him and beheaded the monster. As Medusa was beheaded, she birthed Pegasus and Chrysaor from her neck, who were Poseidon’s children. Perseus threw Medusa’s head into his satchel and journeyed home.

On his way home, Perseus came upon Andromeda, a beautiful woman embedded into a rock on the shore. The Cetus was a sea monster in the water below that was imminent to eat Andromeda. Perseus slew the monster and rescued Andromeda from the rock.

The Moral of the Story

The story of Perseus and Medusa is told to teach various life lessons. Perseus is cast out into the sea in a wooden chest with his unfaithful mother, yet they survive the rough seas by praying to Poseidon for the seas to be calm.

Once landing on the island of Serifos, Perseus grew into a strong man with noble character and great intelligence. As King Polydectes ordered the near-impossible task that Perseus bring him the head of Medusa, Perseus dedicated himself to fulfilling the demand to save his mother.

As the son of Zeus, Perseus had help from the gods during his journey to find Medusa. Perseus used these gifts to locate Medusa and behead her, but it was also his strength, courage, and intelligence that helped him succeed.

His courage, strength, and intelligence was also the reason that Perseus saved Andromeda from the Cetus and returned home with her, slaying both Phineus and Polydectes with the head of Medusa by turning them into stone.

The story of Perseus and Medusa is a story of perseverance, bravery, and dignity. Perseus personifies the length one would go to in order to save the ones you love. Perseus shows the authenticity of his character when he rescues the helpless Andromeda from the Cetus and the attachment to the rock. The bravery and courage of Perseus are shown as he beheads Medusa, as well as his defeat of Phineus and Polydectes.