When you think of the deities in ancient Greek mythology, the attributes that come to mind first are their aesthetically pleasing figures. You envision the gods with their perfectly chiseled bodies and the goddesses radiating an aura of beauty and desirability.

Sadly, the same can’t be said for Hephaestus, the god of fire and forges. But, where he lacked in physical appeal, he made up for in every other aspect of his life.

One of Hephaestus’ interesting facts is that while the other gods of the Greek pantheon considered him to be a minor deity, they grew to become extremely reliant on him.

This article explores the top 8 interesting facts about this god, whose reputation precedes him. Read on. 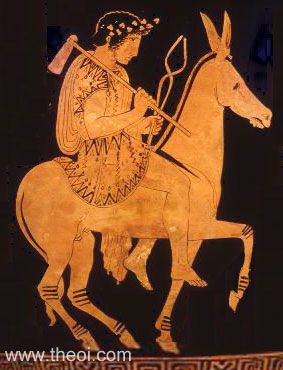 Hephaestus is considered to be the child of Zeus and the goddess Hera. Hera, who Zeus’ wife and sister, was the goddess of marriage. Ironically, jealousy and vengefulness were some of her most dominant traits.

Some ancient stories reveal that Hera was jealous that Zeus had conceived and given birth to Athena without her assistance. So, she decided to exert revenge on him by having a solo conception as well.

She ended up giving birth to Hephaestus without Zeus’ assistance.  Because of the peculiar circumstances surrounding his conception and birth, Hephaestus was born ugly, deformed, and with a shriveled foot. Hera was ashamed of her creation and rejected Hephaestus.

After the birth of Hephaestus, Hera tossed him off Mount Olympus. He survived the long and dangerous fall and ended up in the sea near the island of Lemnos.

He was rescued by the sea goddess Thetis, who took him to the island of Lemnos. He grew up never knowing where he came from and was raised by the local tribe.

During his time on the island, Hephaestus became highly skilled at making jewelry and trinkets. His craftsmanship with the forge also grew and became so renowned that it caught the attention of the gods.

He began to plot his revenge. He forged a magnificent golden throne and had it transported to the gods.

As soon as his mother, Hera sat on it, it ensnared her, and despite her supernatural strength, she just couldn’t break free from it. He eventually went on to become the blacksmith of the gods where he crafted all their weapons and accessories.

4. Hephaestus and Aphrodite Were Married

Aphrodite, the deity of love and beauty was considered the most desirable of all the goddesses at the pantheon. So many gods were preparing to go to war over her, and Zeus was growing increasingly tired of having to calm so many storms.

So, he presented Hephaestus with an offer that he couldn’t resist. In exchange for setting Hera free from the throne that had ensnared her, he would give Aphrodite to him in marriage.

Naturally, Hephaestus jumped at the prospect even though Aphrodite didn’t feel the same way. Aphrodite ended up carrying on a secret affair with Ares, the god of war. She went on to have Ares’ child Harmonia and that marked the end of her marriage to Hephaestus.

5. Erichthonius Was the Son of Hephaestus

Erichthonius, one of the greatest kings of Athens, was the son of Hephaestus. However, just like that of his father, the circumstances surrounding his birth were peculiar.

It all began when the goddess Athena visited Hephaestus to procure some weapons. In the course of their interaction, he tried to seduce her, but she rejected his advances.

Hephaestus wouldn’t take no for an answer, and his advances became more aggressive. Athena was determined to hold on to her virginity, so she fled, with Hephaestus in hot pursuit.

When he caught up with her, a struggle ensued, and in the process, his semen fell on her thigh. Disgusted by the ordeal, Athena brushed the semen away. But when it fell on the earth – Gaia – she became pregnant. Ericthonius was born from the earth.

6. He Forged the Necklace of Harmonia

Hephaestus crafted the infamous Necklace of Harmonia that brought tragedy to each of its owners. It was made of gold and sapphire and fitted around the neck with hooks that were shaped like snakes tails.

After catching Aphrodite and Ares in the act, he presented them to the other gods hoping they would punish them for their indiscretions. All they did was laugh at the situation.

That fuelled his rage and decided that he would punish their offspring instead. So he fashioned a necklace filled with jealousy and spite and presented it to Harmonia, the daughter of Aphrodite and Ares, as a wedding gift. This marked the beginning of an endless cycle of tragedy and destruction for whoever had the misfortune of owning it.

7. His Creativity Was Unmatched

Hephaestus was one of the most creative gods in Greek mythology. He created nearly everything that you associate with the Olympians.

From the helmet and sandals of Hermes to the bows and arrows of Eros. He also played a role in building some of the great palaces of the mortal kings.

Zeus ordered Hephaestus to create a woman who was so beautiful that she would be irresistible to both gods and mortal men. So, he modeled a woman after the goddess of love herself – Aphrodite.

When he was done, he brought her to life and named her Pandora. Zeus used Pandora to punish Prometheus through his brother Epimetheus, for stealing fire from the gods and giving it to mankind.

If Hephaestus’ interesting facts are anything to go by, his story has everything you want and expect: Hardship, tragedy, lust, heartbreak, and revenge. You’ll be surprised to learn just how many other stories he is involved in.