The protagonist in Homer’s epic poem The Odyssey is Odysseus, King of Ithaca. The poem describes the great journey Odysseus has to make back home after Troy has fallen. Odysseus encounters many setbacks and must overcome many hurdles to continue on his journey.

One of those encounters is with a giant cyclops named Polyphemus. 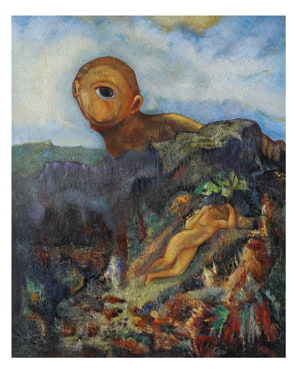 Odysseus Lands on the Island of the Cyclops

As Odysseus and his crew are sailing back from Troy, they are swept to many lands. One of the lands is an island inhabited by cyclops people. Cyclops only had one eye and would eat humans at any given opportunity.

After eating, drinking, and resting, Odysseus and his men fell asleep in the cave, only to be awoken by a giant cyclops named Polyphemus.

As Polyphemus entered the cave, he led his flock of sheep inside and rolled a stone in front of the entrance of the cave to seal it shut. Polyphemus quickly noticed Odysseus and his men had made themselves at home in the cave. This infuriated Polyphemus. He quickly smashed in the heads of two of the men and devoured them.

Odysseus knew the giant cyclops possessed great strength, greater than he was able to battle. Odysseus and the remainder of his men survived the night in the cave with the cyclops.

When Polyphemus awoke the next morning, he smashed in the heads of two more men and ate them for breakfast. At this point, Odysseus knew the only way to defeat the cyclops and make it out of the cave alive would be to outsmart him.

Once Polyphemus had left, Odysseus and his men came up with a plan to defeat the cyclops. They found a large log and made a sharp spear out of one end. They hid their new weapon and waited for Polyphemus to return.

Polyphemus returns that evening with his flock of sheep and enters the cave, sealing the entrance of the cave with the large stone. Polyphemus smashed in the heads of two more men and ate them. This time, Odysseus was ready.

He asked Polyphemus if he would like some of the wine he had brought with him on his journey. Polyphemus accepted the wine and thanked him for it, asking Odysseus his name. Odysseus replied, “Nobody,” and Polyphemus took him literally.

Polyphemus never had drunk wine before, and the amount of wine he drank made him drunk. Polyphemus passed out in drunkenness, so Odysseus and his remaining men put their plan into action.

“Nobody” Defeats the Cyclops

As Polyphemus had fallen asleep from the wine, Odysseus and his remaining men took their log and heated the end of the log that contained the sharpened spear by placing it over the fire. When the spear had heated and was glowing bright red, they carried the log over to the sleeping Polyphemus and, with all their might, pierced the eye of the cyclops to blind him.

Polyphemus screamed in pain loud enough to cause the nearby cyclops to come to check on him. When asked who was hurting him, Polyphemus screamed, “Nobody!” thinking this was Odysseus’s real name. Instead of helping Polyphemus, the cyclops returned to where they sleep.

Odysseus and His Men Escape

The next morning, Polyphemus led his flock of sheep out of the cave. Knowing that Polyphemus would inspect the sheep before they left, Odysseus and his men tied themselves to the belly of the sheep.

As Odysseus and his men escaped the cave on the bellies of the sheep, they ran to their ship to sail away from the island of the cyclops. As they boarded their boat and pushed off into the sea, Odysseus revealed his true identity to Polyphemus.

It was not “Nobody” that had blinded him. Instead, it was Odysseus, King of Ithaca, who had defeated him!